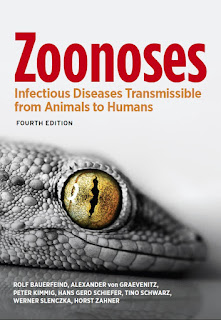 Zoonoses are a persistent threat to the global human health
Today, more than 200 diseases occurring in humans and animals are known to be mutually transmitted. Classical infectious diseases, such as rabies, plague, and yellow fever, have not been eradicated despite major efforts.

New zoonotic diseases are on the increase due global conditions such as overpopulation, wars, and food scarcity, which facilitate human contact with rodents, stray animals, and their parasites. In addition, humans are unwittingly becoming accidental hosts and new links in an infectious chain by engaging in activities such as survival training, which involves camping in open areas and consumption of raw or insufficiently cooked food.

Zoonotic infections cause a variety of symptoms that often do not provide clear evidence of a known disease. Zoonoses, Fourth Edition, describes most occurring worldwide zoonosis and facilitates the identification, diagnosis and treatment of zoonotic infections.